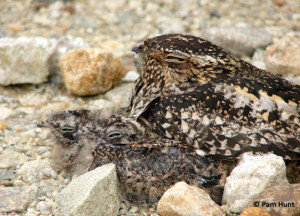 Despite what their name suggests, Common Nighthawks are most active during twilight rather than night, and are not close relatives of hawks. They are sometimes referred to as bullbats, due to their bat-like flying patterns and the loud whooshing sound they make with their wings. These birds are often observed in flight pursuing insects.

37% of Common Nighthawk breeding grounds are located in Canada, though only 10% of the population of the species actually breeds in Canada. Within Canada, most individuals breed in southern Labrador.

Males mark their territories by “booming” their wings – pushing wings downward while veering up from a dive. This creates air movement over the wings and a deep sound. This sound also attracts females and may discourage interference by other species. Territories range in size from very small at 4 h, to very large at 259 ha. 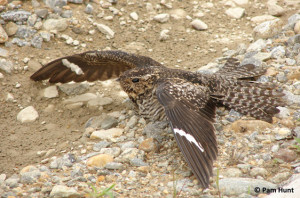 Though Common Nighthawks most commonly nest on bare, rocky grounds (rock barrens, open woodland, blueberry fields, and pastures), they also frequently nest in man-made environments such as flat gravel roofs. They do not build nests but rather lay their eggs directly on the ground or occasionally in woody debris. Eggs are hidden by their camouflage colouration. Unfortunately, the lack of protection from a nest leaves eggs vulnerable to predation by not only by other bird species such as American Crows and Peregrine Falcons, but also to dogs, raccoons, skunks, snakes, foxes, and other ground-dwelling creatures. 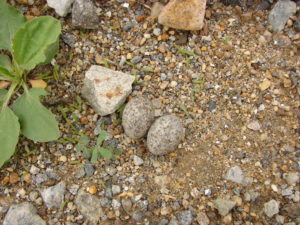 The widespread use of insecticides in both agricultural and urban areas has affected the primary food source of Common Nighthawks – flying insects. It has been suggested that insecticide use may be a contributing factor in the overall decline in this species, though currently there is no direct evidence of this.