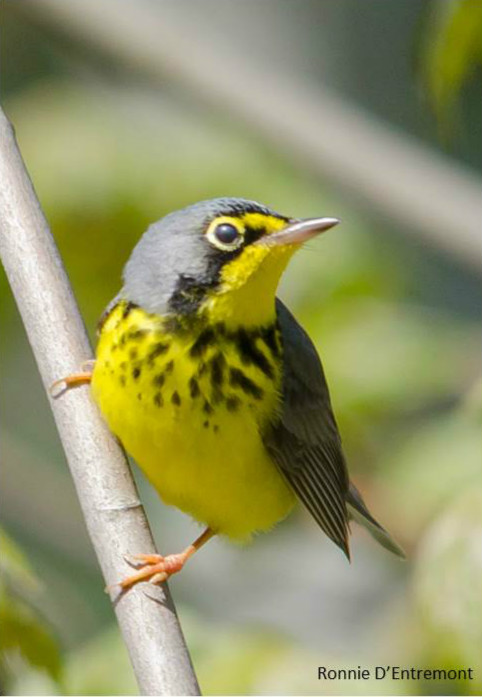 The Canada Warbler is a small migratory songbird that breeds across Canada’s Boreal region (including the Maritimes) and the northern USA. These warblers undertake long-distance migrations between these breeding grounds and their wintering grounds in the Andean subtropical forests of northern South America.

Canada Warblers have one of the shortest recorded breeding periods of any North American songbird. Males arrive on their breeding grounds in Nova Scotia in the later half of May and females usually arrive a few days later. During this time, males sing to attract females and to defend their territory from other males, and females begin nest-building by early June.

Canada Warbler nests are well-concealed and thus very hard to find. They are placed on or near the ground, in ares of dense shrubs, often among tall ferns and tree stumps. Females lay 4-5 eggs on average and incubate them for 11-12 days. Eggs hatch by late June to early July and both parents feed the young nestlings. After 8-9 days of growth the young leave the nest, but are not yet capable of flight. After 2-3 additional days of growth the young are able to fly, and reach full size within 2 weeks of their departure from the nest. At this point they are fully self-sustaining.